Skip to content
Take a small step in doing something that you want to do every single day.
Social, Sports, Thriving

Yip Pin Xiu
Five-time Paralympic gold medallist and Former Nominated Member of Parliament
Yip Pin Xiu has served to galvanise young children, with or without disabilities, to not feel constrained by the limitations they face. Instead she encourages all to embrace the challenges as being part of their identity. She is a national icon that we applaud for her perseverance and unyielding determination. 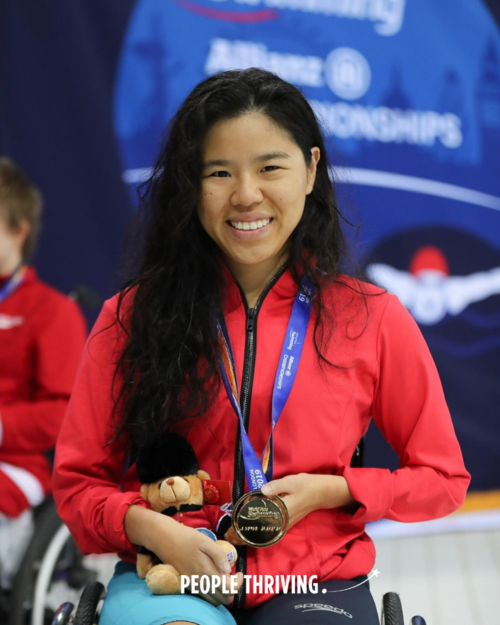 1. How did you get into the sport?
I actually started swimming when I was five years old. It started off as a family activity. My brothers were learning how to swim and I asked my mom if I could learn together with my brothers. She asked the coach who then agreed to take me on. That was how I started when I was five. I love the water, the sense of freedom that I had. I could do anything that everybody else could do and I loved it. At that point in time, I already had a disability, but I could still walk.

I only started to be on a wheelchair when I was around 13 years old. I was still going to swim every weekend with my brothers. Then I was spotted by a volunteer from the Singapore Disability Sports Council and he invited me to join training at a higher level. So that was the start of my competitive journey, when I was around like 12-13 years old.

2. Which athletic achievement are you most proud of?
That would probably be my gold medals from the Paralympic Games, one from Beijing and the second one in Rio. They were both really different. The first gold was just special because it was the first one and the second one still really, really special, knowing that after so many years of trying and trying, I could be back on top once again.

Other than my achievements in the pool, I’m also very proud of my achievements out of the pool. Like my advocacy work, being a voice to speak up for issues such as equality and the social impact that I have made and can still make.

4. What has kept you going despite the tough days you have had?
I want to be better than I am. So really, progress is the thing that motivates me even after 17 years of swimming competitively. Just wanting to be better than I was last month, last year.

5. How have you raised awareness for disability sports in Singapore?
Firstly, by winning. When you win, you raise awareness. But then it doesn’t just end there. For me, it’s also about speaking up further, and trying to tell people that disability does not disqualify. And at the end of the day, I think I have raised awareness for more than just disability sports. I have spoken up for women, for Singaporeans to be more active, for sports in general and various different things.

7. What does thriving mean to me?
Thriving to me means having a goal, doing things you can to reach the goal and being happy in the process of doing so.