Skip to content
Make use of the downtime to catch up on things youve never managed to make time for.
SGStrong, Social

Simon Wong
Founder of Sideways.sg,SG Strong Grantee
Simon Wong is the co-founder of sideways.sg, a space for people with common interests, namely, riding vintage sidecars. Sideways.sg boasts a wide diversity of members who are truly passionate about these vintage sidecars. With the outbreak of COVID-19, Simon and his team applied to the Singapore Strong Fund where they attempted to ride from Singapore to Penang in under 12 hours to raise funds for efforts against the virus. 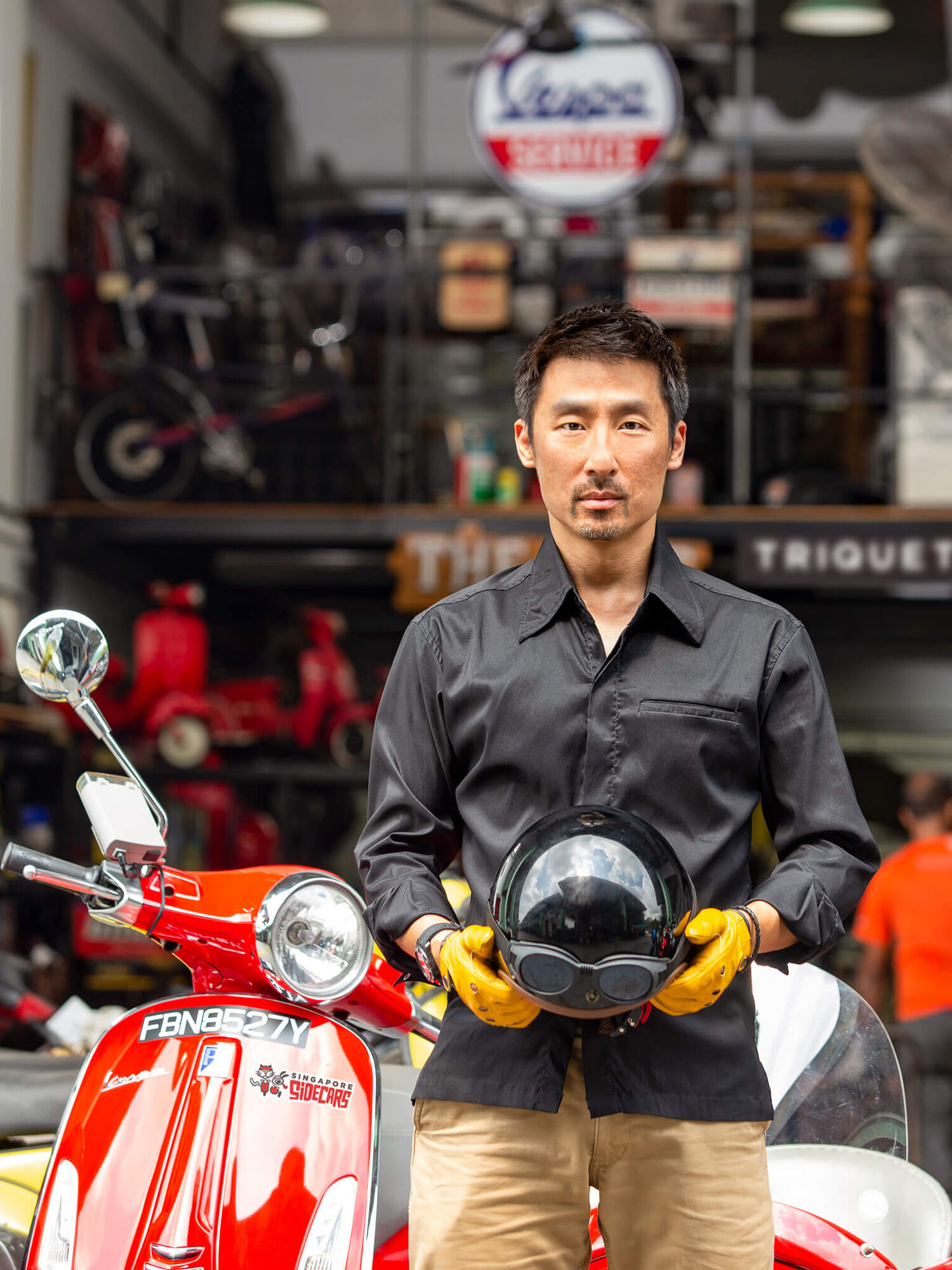 1) What inspired you to start up Singapore Sidecars?

So I have been involved with charity fundraisers for about a decade, organising events for cancer research. Sidecars came into the story a few years in: one day I walked past a pair of perfectly restored vintage sidecars in the street nearby, vintage sidecars in Singapore, I had no idea this was a thing. Immediate reaction – as with anyone else eyeing these – was to stop and stare.

And smile from ear to ear. The sight of these machines brings about such a sense of child-like joy – the 2nd day i walked by, they were still there and I stopped and stared again,

and the 3rd day, the owner was there and I asked – can I buy one? I feel like if I don’t, someone else will make an offer really soon! He said yes, I made the biggest impulse buy, and we became firm friends. So that was Johnny Chen, Co-Founder and a great great guy. I asked Johnny if he’d like to join our charity fundraisers in sidecars – Johnny said yes,  and the turning point where it became a Social Enterprise was after the Nepal earthquake.

We responded to that with a fundraiser rally the same week, and a display of 7 Sidecars over a pedestrianised weekend in Orchard Road – right at the crossroads opposite Heeren. We raised almost 10k loose change and all day long people from all walks of life, locals and tourists alike, came running up asking how much is a ride, how much is a ride – we then said to each other, this needs to become a Social Enterprise so we can sustain the charity activities. We launched SingaporeSidecars 2 years ago last month.

2) In your most recent feat, you and your team attempted to travel to Penang in under 12 hours in order to raise awareness and money for the COVID-19, what made you decide to do it?

The original plan was to head to Nepal to help the Dolma Foundation assist local communities and with the continued recovery from the earthquake.

We had to push Nepal, so that left us at the start of a new year with a vacuum – the fundraiser record attempt to Penang was born out of the idea to beat our own previous record – which was in 72 hours in 2018, riding vintage sidecars, for cancer research.

So we had some back and forth with the record books for a new sidecar record attempt, and a 12 hour challenge was set.

3) What was the toughest moment of this entire project and how did you overcome it?

We knew from the tests the week before the race, the key challenges would be: lack of time, fatigue, and mechanical failure.

We set out to address those by being prepared. Our Lead Riders Gary, Moon and Yusri worked long hours to ensure the machines would deliver, we streamlined them, we made sure riders got used to the handling of the machines each time a modification was made, We ran Pit Stop simulations to make sure support vehicles and sidecars pulled over quickly enough and positioned the Pit Stop Crew in exactly the right spots for optimal refuelling time.

Nikki Muller made sure the entire team was kept well hydrated and energised on-the-move, so folks didn’t get too cranky!

Also if you consider that we failed the first 2 of 3 speed tests we conducted with an hourly average of 61kmh, we would need a minimum 67kmh to make it – 12 hours would be very, very tight. This is before taking into account dodgy weather, crosswinds, strong headwind, all of which will slow us down. The ultimate nightmare scenario will be when engines overheat and we lose time by breaking down.

For that reason we sent 3 sidecars in the hope that at least 1 would make it through – as luck would have it, all 3 made it.

4) Could you describe how it felt when you reached Penang and discovered that you and your team shattered the original record?

We were absolutely over the moon when we arrived at the near end of Penang bridge at the 9hour mark!!! You run on adrenalin for these moments. We decided to cross the line together so each sidecar and rider got the same timing.

We had perfect conditions the entire way, great weather, no rain, no traffic jams, no strong winds, no breakdowns – we were too early for our welcome party, so we decided to proceed and get the fastest time – we crossed over into Penang, and had so much spare time we returned again to pick up our welcome party! We did it in 9hrs 20mins in the end.

5) What is something you would say to someone struggling right now?

Keep on keeping on. Tough times don’t last – tough people do. Day always follows night. Look for the silver linings in the meantime.

Make use of the downtime to catch up on things you’ve never managed to make time for. 2 months off a lifetime lasting 960 months if you live to be 80, is not much time at all. Read books, learn to cook, plant things, practise yoga, meditate, introspect, find out about yourself, and plan ahead a little.

6) Has there been anything/anyone who has been very instrumental in this project?

The team. You couldn’t wish for a better bunch of guys, Yusri, Gary, Moon, Sir Richard, Yuen Yee, Crazy William, Brother James, Gui ’105’, and of course Nikki who joined on a whim, thinking she was signing up for a charity dinner event ; p She was awesome and brought great positive energy to the journey, always full of beans. And you can’t forget Co-Founder Johnny Chen. He made sure the machines were ready in time for the team to soup up for the ride. Always always there for us all.

Finding ‘who’ you really are, discovering the things that you do for no other reason than it appeals to you, and you’d be doing those things if nobody’s watching. One thrives when one taps into this authentic inner cache, and acts on it. You’ll find boundless energy to bring into your slice of the world some significant change.