Sejal Bagaria
freelance emcee, podcast host and public speaker
After dropping out of Junior College 6 years ago, she has been doing communications for 7 years now and is very passionate about her podcast, Spill Sesh with Sej. After going through many obstacles, she has found her passion in this industry and is enjoying everything about it. 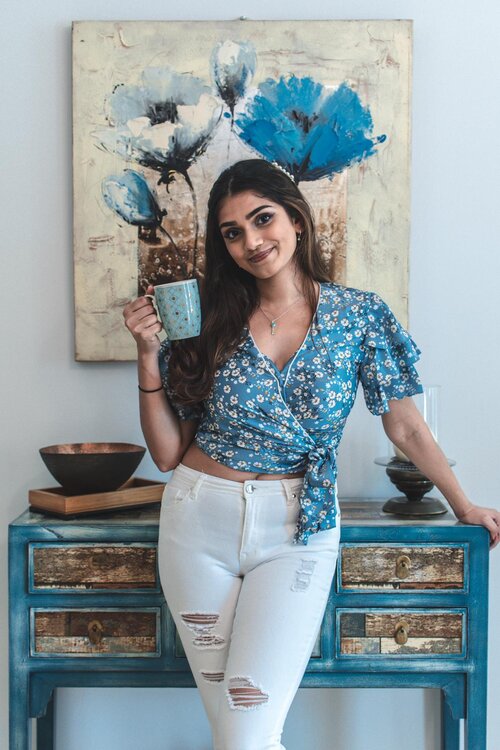 1) How has dropping out of Junior College changed your life?

Junior college (JC) was a very interesting time for me, especially dropping out of JC because that was the first time I really experienced failure on paper and failure in life. I was always very academically inclined and would get my good grades in school. However, for the first time, I saw myself failing subjects in JC. That was not normal to me because that’s never happened before. I started to really take it on myself that I was a failure, not my grades, but me as a human in life, and this greatly impacted me, my mental health and the way I looked at life. Eventually, my parents encouraged me to look at a different life path, not because I wasn’t good enough for JC, but because they knew I was meant for other greater things. So finally, I found Ngee Ann Poly with mass communication, and that was single-handedly the best decision of my life – to drop out of JC and go to Ngee Ann Poly.

It changed my life because one, I learned the art of being passionate about something. I had never been so driven about anything in my life. I’ve always been an ambitious person and going to Ngee Ann Poly made me want to be even better. It made me want to really achieve the stars and that was how it impacted me positively. But negatively, it did really instil a fear of failure in me. I used to get really scared before sitting for any sort of exam or tests. And even in poly, especially my first year, I would literally cry on the bus on the way to school because I had a marketing test. While I aced the test in the end, it was just that fear of tests that I really developed from dropping out of JC, which has now faded over the years. That’s how dropping out of JC impacted my life positively, way more than it did negatively.

2) How did you begin your podcast titled Spill Sesh with Sej?

I was on Radio Heatwave at Ngee Ann Poly so I had experience in hosting radio shows and I loved doing it. For some reason, I always enjoyed the talking sections more than the music sections. There was already a part of me that loved interviewing and hosting in general, but I didn’t know there was a platform and a medium to just talk and engage with the listeners. I would say I became a very avid listener of podcasts around 2019 and would often listen to many, but never knew or thought to have my own.

I had gone on exchange to Brighton at the University of Sussex, and I wanted to apply there to host my radio show. I had to create a show poster, title, description and everything. I spent hours trying to brainstorm a name for the show and I came up with the very first version of the Spill Sesh with Sej. The show poster was so ugly because I didn’t know how to design. I submitted it anyway and I got it, but I decided not to go with that radio show. I still kept all these files on my computer and suddenly we went into Circuit Breaker, and I was like, wait, why don’t I just start my own? That’s literally how it happened and within days I just figured out how to do it, recorded my first episode, edited it, and it was up on Monday 11th May, 2020.

3) Being an emcee and podcast host, do you get nervous about speaking in front of people? If so, how do you overcome it? If not, what have you done to get yourself here?

Yes. I still get nervous, but not as much. I think because now I have a lot of experience, although granted I can definitely get even more experience because I believe that you always learn from every session you host, that you will never be perfect. But I will say, because I’ve been doing this for so long, I don’t get as nervous as I did previously. Now I think it’s a lot more natural, I know how to calm my nerves and it’s always the same thing. Five minutes before each event, I always get tingling sensations in my hands, and I expect it at this point. That is usually what I experience, not so much of stage fright anymore, unless it’s a very, very big audience.

I remember the one time I was very nervous because it was a grand scale event and there were many people and important guests at the Ministerial Forum in 2018. That was the one event I will never forget because I was shaking even though I’m not the kind that gets nervous. For that event, I was shaking before getting on stage and how I overcame it was through a lot of deep breaths. Obviously, it’s not okay to make a mistake, but I tell myself that if you make a mistake, it’s not the end of the world. So, I calm myself down and remove that unnecessary pressure from my head.

Once I do that, I’ll just remind myself that I can do it, I am good at what I do and that they chose me for a reason. I just take one deep breath, walk up on stage and the one thing I always do that helps me is smile and nod. It’s kind of fake it till you make it, and you keep smiling so no one’s going to know that you’re nervous. That’s what I do and it works. 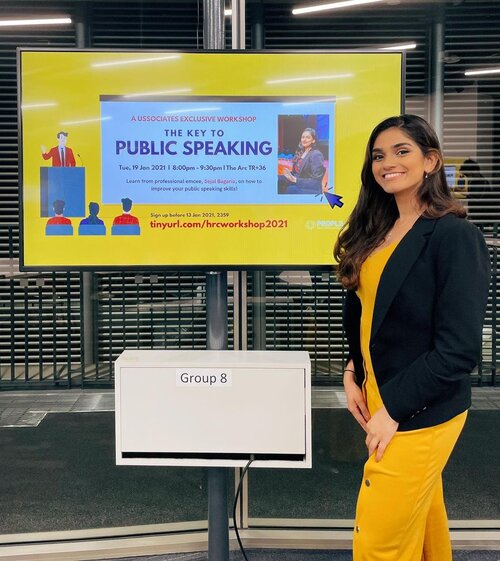 4) What was the biggest setback you have faced in your career and how did you deal with it?

I wouldn’t say this was the biggest setback I’ve experienced in my career, but it impacted the career I am in now. I wanted to be a journalist back in 2015 and I was so set on it. I didn’t think there was anything beyond that. When I was applying for my Year Three internship, I applied to a company with an amazing media platform. At that time, it was up and coming and I wanted the job to be a writer there so badly. I applied, went for the interview and the editor called me and told me that my writing was not good. That was one of the biggest, most disheartening moments. Till today that I remember. I was so sad, and I thought that I was never going to be a writer, but it’s because of that setback that I found another industry called public relations and this is where I’m absolutely thriving.

I love what I do and if I didn’t get rejected by that company, I would have never thought to apply to another company or a public relations industry. I just fell in love with it and now I know that I want to work in public relations. So, I would say it was one of the biggest setbacks, but it was also one of the most rewarding moments of my life because now I work with people in that company on the other side of the desk.

5) What is the most memorable event you have had working with the communications industry?

The most memorable event would definitely be my first event that I ever planned during my first public relations agency in 2017 for an F&B outlet that had just launched. It was a bar/restaurant serving Indian cuisine with a Western theme to it. My supervisor had faith in me even though it was my first week there, and she said, “Okay, here you go, what should we do for this account?” And I was like, what do you mean? And I just suddenly had a really good idea. I thought that because the launch was around the time of Holi, which is an Indian festival of colors, I thought to incorporate the two. It worked so well, and we got so much coverage at my first event. That was so rewarding, and I’ll never forget it because it was something that I planned from scratch. It was my idea that got executed and the client and my supervisor loved it.

6) Who has been your biggest support throughout your career?

My mom a hundred percent. My dad too obviously, but my mom has been my biggest support. She’s the first one that came to mind because she was a journalist in the communications industry and went to Ngee Ann Poly. I think she has always been my biggest support and cheerleader, especially through my very dark days when I dropped out of JC, because she knew the whole time that I was made to be in the communications industry since she was from it too. She knew that I was going to be doing something in this industry, but she just didn’t know what. Every time I failed, she would always be there to push me back up and remind me I am meant for bigger and greater things.

To me, thriving means living your best life. It means you are happy mentally and physically, successful and not surrounded by toxic, fake people but by people you want to surround yourself with. You are also doing things you want to do, things that make you happy and fulfilled, and that is what thriving means.